We award Peace Prizes at the end of every Term to the child in each Year whose efforts have been particularly outstanding.

We award the Caring Cup to children who demonstrate caring qualities within their work and play at school.

The Appleyard Cup is awarded to children who excel in Music.

The Katy Cup is a special award given to children who excel in their day-to-day school life.

The Jonathan Sands Award for Academic Achievement is awarded in recognition of outstanding academic achievement.

The McKeown Sports Trophy is awarded to children in recognition of sporting achievement.

The Creativity Cup is awarded to children in recognition of their creativity skills.

The school has four Houses: Romans, Tudors, Vikings, and Victorians.  Children accumulate House Points for their efforts and the winning House is announced at Sharing Assembly every fortnight. The House with the highest total points for each Term is awarded the House Trophy at the End-of-Term Assembly. 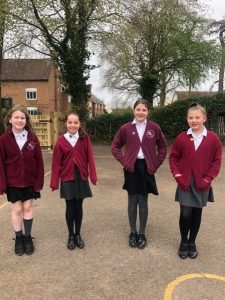 Keep updated with important diary dates throughout the school year

How can we help?